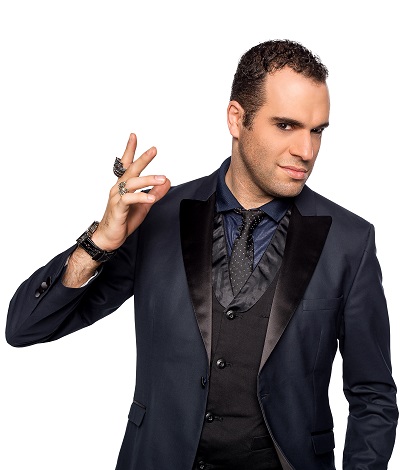 Spidey has captivated the minds of people around the world with his tours across North America, eight international TV shows and 50+ million online viewers.

Spidey has performed on the stages of the Las Vegas Rio Casino and the iconic NYC Apollo Theatre. He was named US Mentalist of the Year 2017 and has performed for major celebrities like Jennifer Lopez, Steve Harvey, Simon Cowell, Neil Patrick Harris, Penn & Teller and many more.

Spidey will perform his much-anticipated mind-reading show that has been a success on NBC’s TODAY Show, TMZ and Rachael Ray! He joined the cast of CW’s Masters of Illusion and his new NETFLIX Original Series: Brainchild is being watched in 170 countries! Spidey’s other TV appearances include FOX’s Showtime at the Apollo with Steve Harvey, Discovery Channel, Entertainment Tonight and many more. He promises to bring his popular TV tricks to the North Peace Cultural Centre stage. A magical journey that taps into your every emotion. Spidey presents a mind-blowing and hilarious MAKE BELIEVE performance. Whether it’s playing a game of mind Pictionary or a heart-racing game of Russian roulette, you will see and experience things you never thought possible. He’ll even tap into someone’s happiest memories and reveal impossible details!

PEOPLE Magazine: “You’re a WICKED SORCERER!” US Weekly: “That was the ULTIMATE MAGIC TRICK!” TODAY Show: “SEE it to BELIEVE it!” Penn & Teller: “You KILLED us with that trick! BRILLIANT!” Entertainment Tonight: “He’ll DEFINITELY leave you in AWE!” Steve Harvey: “You and me, we’re going to Vegas!”