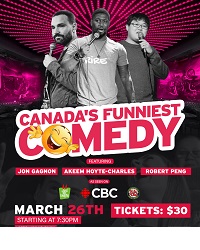 Join Karim Moussaoui as he hosts  Canada's Funniest Comedy live at the North Peace Cultural Centre on Saturday, March 26th. With three rising stars on the comedy circuit, Jon Gagnon, Akeem Hoyte-Charles, and Robert Peng will have you laughing all night long.

As a cartoonist and award-winning screenwriter, Jon Gagnon has a knack for both short, concise and longer storytelling-style jokes. Jon worked as an environmental engineer, was a contestant on Canada’s Smartest Person, and is known for his thought-provoking humour about society, love and relationships.  Jon has performed stand-up comedy across Canada and the USA. He is the writer/creator of the animation series "Stickman" and has appeared on the CBC program “Canada's Smartest Person Season 2." Jon was a writer and producer for Yuk Yuk's "The Brett Martin Show" from 2015-2019.

After dropping out of college twice and leaving a promising career in sales at age 25, Akeem Hoyte-Charles decided to switch his focus from business to the arts. He hopped on stage at an open mic at a local comedy club in Montreal and has since performed in Los Angeles, New York, Toronto, and Vancouver where he currently lives. He’s also had roles on tv shows seen on Freeform, the CW as well as Netflix.  He’s a young up-and-coming star that you should definitely look out for.

Robert Peng is a Vancouver-based comedian. After not being able to find an engineering job Robert channelled that nerd energy into stand-up comedy delivering gut-punching humour on dating and job finding. Robert has found success gaining a place at the semi-finals at the Seattle International Comedy Competition as well as performing at Yuk Yuk's and Rick Bronson's House of Comedy.